On 10-12 May 2018 28 representatives of nature research and conservation institutes came together in Bankya, Bulgaria to talk about the conservation of mammals on the Balkans. They represented 8 countries in Southeast Europe: Albania, Bosnia & Herzegovina, Bulgaria, Kosovo, Montenegro, Macedonia, Greece, and Romania. The meeting was part of the project ‘Building capacities in Eastern Europe‘ of The Habitat Foundation. It was financed by the INNO-fund of WWF the Netherlands. 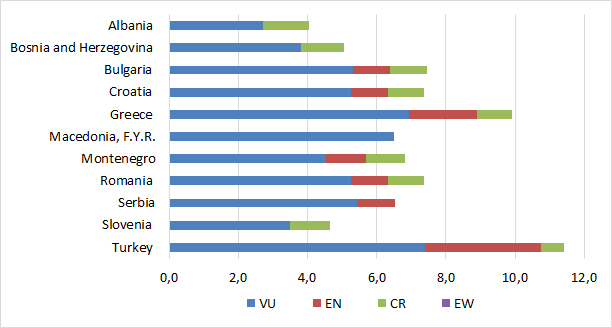 Southeastern Europe is among the regions in Europe with the highest number of mammal species. It harbours core populations of endangered species and is the source of some species for the rest of Europe (see the expansion of wolf, lynx and bear from E-Europe to W-Europe). It is more than worth putting effort to preserve this species diversity and learn more about the mammals’ biology and the factors threatening their persistence. During the three day workshop, the participants provided extensive presentations on the mammal research and conservation work in their countries and the problems they face in mammal conservation. This resulted in a long list of causes for the threatened status of mammals on IUCN’s Red List or for their regional decline. It became clear that the threats for the mammals in most countries are the same but that the capacities to fight these threats differ a lot between the countries. A few countries have strong organisations with the equipment and human capacity to study mammals and use this knowledge for conservation activities. In other countries, the number of people working on mammals is limited and they aren’t organised; often they lack modern techniques to study mammals and/or lack the experience to lobby for their protection.

It soon became clear that the people and organisations could learn a lot from each other. Already during the workshop, ideas about mutual assistance developed. Halfway the workshop the participants came with the proposal to think about establishing a regional network, focused on applied research and the conservation of mammals on the Balkans. The debates were very intensive and enthusiastic and a mission statement was drafted on the spot. It was agreed that the name of the network will be ‘Balkan Mammal Network‘.

The Balkan Mammal Network is an open, interdisciplinary network of specialists and organisations working on mammal research and conservation in the Balkan region.

The Balkan Mammal Network recognises the rapid changes on a social, economic and political level and the tensions affecting the populations of mammals in the region.

The Balkan Mammal Network provides and shares data and expertise to establish and maintain healthy, sustainable mammal populations for the benefit of mammalkind*. Activities include research, capacity building, data sharing and advocacy.

* Warm blooded animals that give birth to live offspring, with four or two legs, and that feed their offspring with mother’s milk.

The coming months will be used to set up the network, which in essence means to set up a communication network to facilitate the exchange of knowledge, experience, and data.

Are you interested to become a member of the network and assist in its development and help to preserve the mammal populations in Southeastern Europe? It is easy. Just fill in the form beneath.